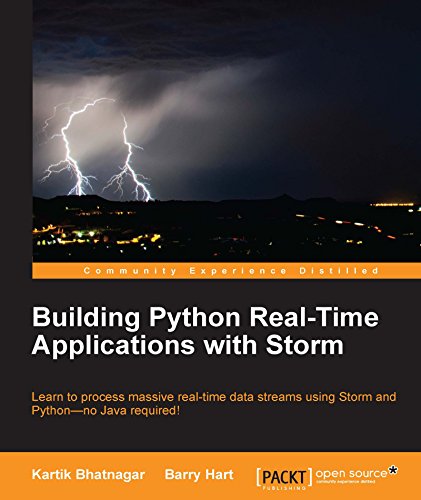 Who This Book Is For

This book is intended for Python developers who want to benefit from Storm's real-time data processing capabilities. If you are new to Python, you'll benefit from the attention to key supporting tools and techniques such as automated testing, virtual environments, and logging. If you're an experienced Python developer, you'll appreciate the thorough and detailed examples

What You Will Learn

Big data is a trending concept that everyone wants to learn about. With its ability to process all kinds of data in real time, Storm is an important addition to your big data “bag of tricks.”

At the same time, Python is one of the fastest-growing programming languages today. It has become a top choice for both data science and everyday application development. Together, Storm and Python enable you to build and deploy real-time big data applications quickly and easily.

You will begin with some basic command tutorials to set up storm and learn about its configurations in detail. You will then go through the requirement scenarios to create a Storm cluster. Next, you'll be provided with an overview of Petrel, followed by an example of Twitter topology and persistence using Redis and MongoDB. Finally, you will build a production-quality Storm topology using development best practices.

This book takes an easy-to-follow and a practical approach to help you understand all the concepts related to Storm and Python.